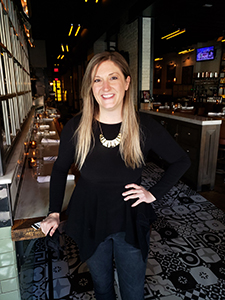 The general manager of The Pearl Short North, Kelli Lynch, always knew she wanted to take care of people as her career. She took a leap into hospitality and fell in love with the industry. Lynch began as a server and bartender at Cameron Mitchell Restaurants’ (CMR) Martini Italian Bistro Polaris (now Marcella’s Polaris) in 2006. After five years, she transitioned to a manager role before moving to Marcella’s Short North in 2012 as their beverage manager.

Between 2015 and 2018, Lynch worked at Martini Modern Italian as the assistant general manager and beverage manager before moving to Del Mar in the same roles. In 2020, she transitioned to her current role at The Pearl Short North.

Her favorite thing about working for CMR is the associates-first culture. “I live by the CMR philosophy,” she said. “Take care of your people, and they will take care of the guests.”
Lynch, who is from Sidney, OH and currently lives in Merion Village in downtown Columbus, loves attending concerts and Columbus Blue Jackets hockey games outside of work. Her favorite CMR dish is a split between the filet from Martini and the jalapeno potatoes from Mitchell’s Ocean Club.

She advises others in the hospitality industry to continue to learn new things. “Nothing worth having in this world comes easy,” she said. “There are ups and downs in the restaurant industry, but hard work always pays off.”